Here is where I stand with the challenges I have joined after the month of September (only challenges that I read books for this month are featured here):

British (10/12)
9. The House at the End of Hope Street by Meena van Praag
10. A Bright Particular Star by Elizabeth Hanbury

5. ParaNorman by Elizabeth Cody Kimmel
Posted by Ricki at 11:59 PM No comments:


Title: Star of the Morning
Author: Lynn Kurland
Challenges: 100 Books in a Year
Posted by Ricki at 12:01 AM No comments:

The Howling Heart by April Bostic

The Heavens Rise by Christopher Rice

Gideon Smith and the Mechanical Girl by David Barnett
Posted by Ricki at 8:34 AM 2 comments: 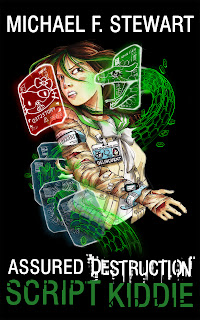 Michael Stewart is back with his spunky heroine, Janus Rose in the second Assured Destruction novel, Script Kiddie.  Still recovering from the events at the end of Assured Destruction, Janus also has to serve 2000 hours of community service.  Because Detective Williams sees more to Janus than just a juvenile delinquent, she gets Janus assigned to help in the cyber crimes division for her community service.  Janus's first case involves someone stealing account numbers from a bank - the bank that is about to take back the mortgage on her mom's store.  Mrs. Rose's MS is getting worse, leaving Janus to run Assured Destruction alone...with some unwanted help from her mom's new boyfriend, Pete.  As if Janus does not already have enough on her plate, her friend Hannah asks for her help to stop an older guy she met online from stalking her.  Janus is feeling pretty good about herself, until she ventures onto an hacker forum and is called a script kiddie.  Now Janus must prove to the police, Hannah, Pete, and herself that she has what it takes to truly be a good hacker.

Script Kiddie was go, go, go from the first page.  Stewart really knows how to keep the action moving with an intriguing and compelling plot and a lovable heroine - even if her methods are somewhat unethical.  Stewart does a good job weaving together multiple storylines but some of the situations are rather unrealistic.  I'm not talking about Janus's actions, but those regarding her school and what seems like a wavering truancy policy.  This is just a small thing, though, and does not hinder the story in any way.

Script Kiddie is a very fun read - but anything with Janus Rose as a main character is bound to be a thrill ride.  Michael Stewart has a winner in his Assured Destruction series, which is unlike any other YA on the market today.


Thoughts: I liked that Hanbury wove some intrigue into what would otherwise be a typical Regency.  This elevated the book to a new level, and really kept the plot moving.  I also enjoyed how everything was wrapped up at the end - even though it was obviously what would happen, at some points it was unclear how it would all wind up right, and that was great.

The Heavens Rise by Christopher Rice

The Dark Between by Sonia Gensler

Untold by Sarah Rees Brennan
Posted by Ricki at 9:24 AM 1 comment:

The Ruins of Lace

Thoughts: I knew nothing about this period of history, so The Ruins of Lace was a real eye-opener. Anthony did a great job weaving so many strong characters together into a story, although the dog was my favorite (but the monstrosities he described did make me sick).

Email ThisBlogThis!Share to TwitterShare to FacebookShare to Pinterest
Labels: 100 Books in a Year Challenge, For Fun, Historical Fiction Challenge

Overpowered by Mark K. Kruger
Posted by Ricki at 9:18 AM 1 comment:

Thoughts: The first chapter really pulled me in, but once Elsa got to Hollywood and became Laura Lamont, I honestly got bored.  I would have preferred to have more family genre than a look at all of her life, which included some characters that seemed to serve no purpose - I know real life is like that, but I prefer fiction to have more cohesion.

Email ThisBlogThis!Share to TwitterShare to FacebookShare to Pinterest
Labels: 100 Books in a Year Challenge, Early Review

The Morning Star by Robin Bridges

Raising My Rainbow by Lori Duron 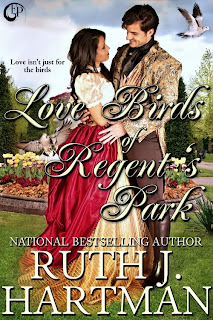 A Bright Particular Star by Elizabeth Hanbury
Posted by Ricki at 9:09 AM No comments:

Thoughts: I am not a Star Trek fan, but I loved this!  It is funny and fast-paced - definitely a light read - but it really makes you think, too.  I am not sure what I thought of the three Codas, but the main story without them is 5 stars.

Thoughts: This had zombies! And not your modern day apocalypse type but good, old-fashioned voodoo zombies (which makes sense considering when the story was originally written). While I am not really a fan of the style of works from the so called Golden Age, I love the radio drama treatment that Galaxy Audio has given Hubbard's stories. This story was pretty good, too, as the mystery and suspense was very engaging as Detective Lane knew zombies were not real, yet there was no other logical explanation.

The House at the End of Hope Street

Title: The House at the End of Hope StreetAuthor:  Meena van Praag

Thoughts: This novel about lost women is the perfect book to get lost in.  The literary references are fun, as in getting to know the current residents of the house at the end of Hope Street.  The story meandered with a fluidity that shouldn't have worked as well as it did.  This is a wonderful example of magical realism.

Email ThisBlogThis!Share to TwitterShare to FacebookShare to Pinterest
Labels: 100 Books in a Year Challenge, British Books Challenge, For Fun 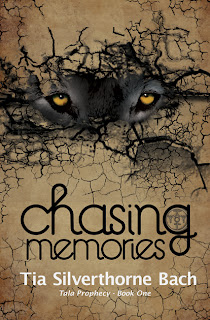 Reagan Cooper seemed to have the perfect life.  Almost a senior in high school, she was on the cheerleading squad, had two best friends, and a coveted boyfriend.  However, one camping trip changes all of that when the tent she is sharing with her younger brother is attacked by some wild animal and her brother disappears, presumably dead.  Reagan only has foggy memories of that night, coming back to her in bits and pieces.  Oddly enough, her grandmother seems to know something, but she only gets chances to talk to Reagan cryptically.  She does give Reagan a candle and a special amulet that seems to make Reagan feel better – well, except when the new boy, Rafe, is around.  Rafe may be new in town, but she seems to have his eyes set on Reagan, but why?  And what secrets is he hiding?  Could everything strange in Reagan’s life somehow be tied to the attack?

Bach does a great job with keeping the plot moving and portraying Reagan as a popular and real teen.  The storyline is engaging and everything a good YA paranormal needs to be.   However, some of the interaction between the characters, transitions between scenes, and information dropping seems stilted.  Despite these issues, which will probably be corrected as Bach grows with her craft, this is an entertaining novel.  Some scenes are highly polished and really deliver that “wow” factor.

I enjoyed Chasing Memories and look forward to what Tia Silverbranche Bach has in store nest in the Tala Prophecy series.