Here is where I stand with the challenges I have joined after the month of July (only challenges that I read books for this month are featured here):

100 Books in a Year (72/100)
65. The Legacy by Patricia Kiyono
66. Ready Player One by Ernest Cline
67. Secrets of Catalpa Hall by Lori Lapekes
68. Ghostly Summons by John A. Karr
69. Warp World by Kristene Perron & Joshua Simpson
70. The Universe Versus Alex Woods by Gavin Extense
71. Zen of Wonder by Frank Beddor
72. Fever by Lauren DeStefano

YA Contemporary (5/10)
5. The Universe Versus Alex Woods by Gavin Extense

Debut Author (2/12)
2. The Universe Versus Alex Woods by Gavin Extense

British Books (8/10)
8. The Universe Versus Alex Woods by Gavin Extense


Title: Fever
Author: Laura DeStefano
Challenges: Dystopia, 100 Books in a Year
Posted by Ricki at 12:01 AM No comments: 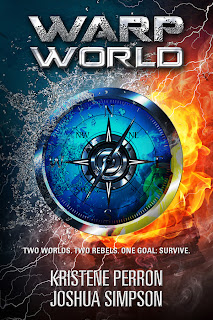 I was expecting hardcore sci-fi when I started Warp World, instead, Kristene Perron and Joshua Simpson pleasantly surprised me with a sci-fi with a fantasy feel.

Seg is on his first mission to find vita, a fuel that is vital to saving his world but must be harvested from other worlds.  Ama is a head-strong sea captain who is about to lose her license.  When these two meet, neither had any clue the adventure that awaits them...one that puts their very lives at stake.

What I enjoyed best about Warp World was the feel.  The plot was intriguing and complex, the world was unique and full-formed, and the characters were interesting and well-developed, but what kept me coming back to read - as this is in no way a one-sitting novel - was the mood and tone.  Perron and Simpson have created a work that is highly readable as it cocoons the reader in a time and space nothing like our own, yet totally believable.

As Warp World shows, Kristene Perron and Joshua Simpson make an excellent writing team.  I hope to see more futuristic works by this team in the future

Email ThisBlogThis!Share to TwitterShare to FacebookShare to Pinterest
Labels: 100 Books in a Year Challenge

The Boy Who Could See Demons by Carolyn Jess-Cooke
Posted by Ricki at 7:53 AM No comments: 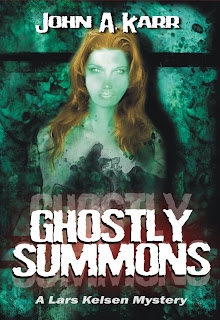 Ghostly Summons
by John A. Karr

published by Dark Continents
2013
No ISBN
Why Read?: Review
Challenges: Paranormal fiction, 100 Books in a Year

In Ghostly Summons, John A. Karr puts a nice twist on the typical PI/Reporter type of mystery.

Lars Kelsen retired from the reporting business after the murder victims really began getting to him - literally.  He always thought that the ghosts he saw were his overactive imagine, especially since they left after his life fell apart and he quit the business.  Now five years later, he is living on Cape Hattaras, working part-time at the hospital.  When a body shows up in a swamp and Lars starts seeing the dead women, he knows the ghosts he has run from are back.  Agreeing to writing a story about her as a favor to a co-worker's husband, he quickly gets pulled into the mystery of her death, and soon his life is on the life.  If he is to live, he needs to figure out what the dead woman is trying to tell him, a quite difficult task as he does not believe in the supernatural.

Karr's concept really adds to what would otherwise be a typical mystery.  Lars definitely comes to life on the page, but sometimes, just a tad too much.  There are passages where it seems Karr is just trying too hard to make Lars realistic, taking him into the realm of more annoying than likeable.  For instance, yes, there are many people Lars's age who would use the word "dude", just not to the extent that it becomes a non-sense word in the reader's head in just the span of a few pages.  However, when Lars is not being annoying, he is a really good protagonist.  And he tries hard, but Karr still hits him - and the reader - with a killer out of nowhere.

Aside from a sometimes annoying protagonist, Ghostly Summons is an enjoyable read, especially for the summer.  John A. Karr really keeps the pages turning, and the paranormal aspect totally kept my interst.  I hope to see more of Lars Kelsen.

Thoughts: This sweet romance had a bit of a gothic feel, which totally made me fall in love with it.  Although I definitely did not have the childhood she had, I could definitely relate to Melody.  I just wish that she learned the true motives of the rake she was involved with - the end felt just a tad unresolved.

One Breath Away by Heather Gudenkauf
Posted by Ricki at 9:38 AM 1 comment:


Thoughts: This did start a little slow, but once Wade, aka Parzival, finds the first key, the action never stops.  The cover reviews make a lot of comparisons to other works, but really, Cline has come up with a completely novel...novel.  Gamers and 80s fans alike will find tons to love about Ready Player One.

For possible review (here, on Bookloons and Bitten by Books):

Roses in Moonlight by Lynn Kurland

Sleeping in Eden by Nicole Baart

Perfect Nightmare by Norman Stanton
Posted by Ricki at 11:21 AM No comments:

Follow my blog with Bloglovin
Posted by Ricki at 7:58 PM No comments:

Thoughts:  I like Kiyono's concepts in The Legacy, but it felt like two separate stories - one concerning Leigh and her abusive stepfather and the other concerning the swords that Andy found.  Obviously, the two characters tie the plotlines together, but it would have been stronger if Andy was the one trying to earn the legacy, not his grandfather.  However, for a shorter work, all of the characters were nicely developed.

Blood of the Lamb by Sam Cabot

The One We Feed by Kristina Meister

The Legacy by Patricia Kiyono

The Wanderer in Unknown Realms by John Connolly
Posted by Ricki at 11:15 AM 1 comment:

Hop: Freedom to Read
Host:  I Am a Reader Not a Writer & Bookhounds
Prize: World Book Night edition of City of Thieves by David Benioff

Form:
a Rafflecopter giveaway
Follow:
Posted by Ricki at 8:27 AM No comments: